Another hot night but not as bad as the day before. Today we are exploring Niokolo Koba National Park in the far southeast of Senegal. This World Heritage site and natural protected area in south eastern Senegal near the Guinea-Bissau border, was added to the UNESCO List of Endangered World Heritage sites in 2007. 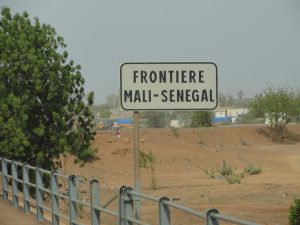 Last night and this morning we were entertained by the many monkeys frolicking in the water. It was also then that we saw tourists for the first time who came here from Dakar on a 3-day trip to see the African bush. 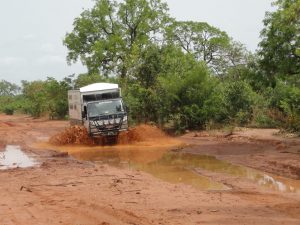 Unfortunately, because of hunting, not many animals are left in the park, but we are told the numbers are slowly growing. They estimate 11000 buffalos, 400 elands, 50 elephants and around 100 lions, but they are very rarely to be seen. We certainly didn’t see any. In the afternoon we arrived in Gouloumbou where we were told about a nice hunting lodge which had a beautiful pool and allowed camping. But unfortunately, the place has been closed. Not sure why and for how long. We could have camped for free but with no facilities, but instead we decided to push on because it looked like the weather was closing in. And the state the road was in would mean that any more rain would make it impossible to get through. 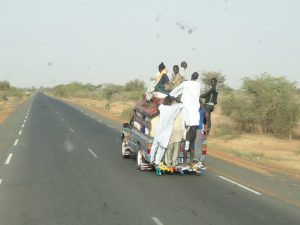 As the clouds rolled in and with 40 degrees the humidity was sky high. It was bloody hot! Next the Casamance. As we travelled towards the coast and then headed south into Senegal and the Casamance, the landscape became lush and tropical.

The area is still troubled by separatist rebels who have caused problems in the area for many years and who have left a destabilizing legacy of bandits. Lots of heavily armed army and tanks on the road and utes with machine guns on the back does make the area a little scary. This conflict started in 1982 after an independence demonstration was organized by the MFDC. This resulted in a civil war and the abduction of tourists. 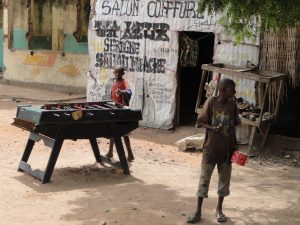 Peace talks were held in 2004. But still today violence erupts occasionally. The fact is that most of the people in the Casamance want to be independent of Senegal. Unfortunately, the street robberies still occur but are the work of criminals. We wanted to visit the National Parc de Basse Casamance, but unfortunately this was not possible due to the presence of landmines. Late that afternoon we arrived in Cap Skirring looking for the recommended campement on the beach. Unfortunately, this was a little run down and the owners (European) were overseas. We decided to look further and found an absolute gem called La Maison Bleue. it even had a small pool overlooking a deserted beach. 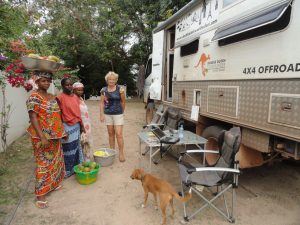 We could park in the car park which overlooked the pool and we could use the facilities in the guesthouse, if we spent some money in the bar and restaurant. One day became 2 weeks. Days were mixed afternoon tropical down pours and days of blue skies. We lazed around the pool, enjoyed the best food we had so far in West Africa and really appreciated the luxury of having a guest house next to our truck. The owner John (from Guinea Bissau) and his Manager, Cecile (from France), are real hospitality people and made us feel so welcome. After all the kilometres we have travelled since Ghana, this was Paradise. When we spoke to the locals it became clear that the conflict in the area really hurts tourism and this means the local people have no work.

The Casamance Conflict is a low-level civil war that has been waged between the Government of Senegal and the Movement of Democratic Forces of Casamance (MFDC) since 1990, over the question of independence for the Casamance region. The whole conflict goes back to in 1960 when the Casamance were told that if they joined Senegal for 20 years, they would then have their independence. 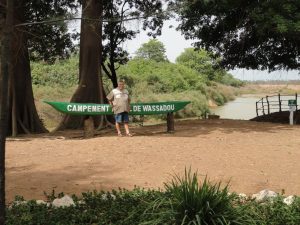 When the government did not honour this promise in 1980, demonstrations turned violent in Ziguinchor. 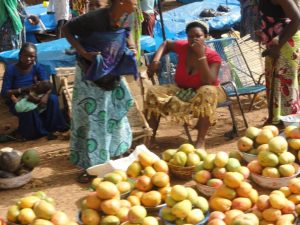 In 1982, peaceful demonstrations were met with the arrest of the MFDC leaders thus sparking resistance and Senegalese clampdowns. Between 1990 and 2001, over 500 people died by reprisal attacks on military buildings. The Guinea Bissau Army supported the MFDC. During that time many landmines where laid and many are still there today, having not been cleared. In 2006 more fighting erupted prompting thousands of civilians to flee across into The Gambia. Last year, and early this year, there was heavy fighting when the MDFC tried to take over the town of Bigona, just south of the border with The Gambia. Also, an illegal shipment of arms from Iran was seized.

We reluctantly left Le Maison Bleue. We had a perfect time and the people, especially John the owner from Guinea Bissau and Celine the manager, made our time there very special. However, we have a visa deadline for Mauritania and a date in Germany for the Globetrotter meeting. 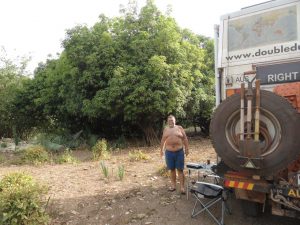 It only took 3 minutes before we had our first road- block and another one after 9 minutes. Well after what we had heard yesterday, suddenly, the army road- blocks had a different meaning and when looking into the bush we could see the armed vehicles (tanks and mortars assembled on the back of utility trucks). In fact, we started to get a little nervous because armed attacks are still taking place at least once a month. After 237km and negotiating 17 police /Army/Customs road- blocks all asking the same question; followed by a drug squad road- block, we arrived at Jungur Project campsite and were welcomed by Jo and Butch. We set up camp, had a dive in the pool and enjoyed a few nice drinks and a perfect BBQ with South African eye fillet specially kept for my birthday. But the meat was off! So instead potatoes had to do instead. Well not a problem, the setting was nice, the weather was great and yes, steak was off! Two out of three is not bad. We enjoyed the potatoes and we enjoyed the African bush and its people. This was in stark contrast to our experiences earlier in the day. A perfect end to a hectic day. We didn’t worry about the fact that the place was full of tourists, NGO and UNICEF representatives and business people. Yes, we are now very close to the Senegal tourist region.

While having dinner last night, a Belgium doctor who was working for UNESCO came past and as my foot is getting worse, we asked him if it was possible for him to look at it. The foot is no longer black but badly infected and my other foot is starting to infect too. It was diagnosed as a Larva Migrant; a worm which has entered my body and is creating havoc. The antibiotics we are using are no good nor is the cream, so he told us to get to a chemist and get new antibiotics and cream. No need for a prescription from the doctor because you can buy anything here without one and at a fraction of the price you would pay in Europe or Australia. 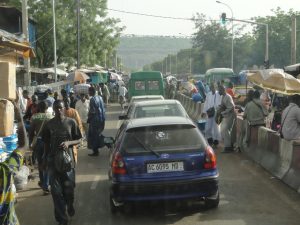 Once we sorted our needs out at the chemist, we spent the rest of the week travelling the beaches of Senegal and generally beach bumming. But like the rest of West Africa, most beaches are places of work (such as fishing). Away from the villages, we found some isolated beaches. As we travelled along the coast we realized this was a tourist area when we saw the many hotels and Europeans sunbathing on the well-kept beaches. We even passed a supermarket catering for Europeans only. We are told that there are direct flights between Gambia and Senegal from Europe. From here, flying time to the UK, Germany, Holland and France, is less than 6 hours. To the south of Saint-Louis is Lompoul, a landscape of huge sand dunes, more akin to Mauritania or Northern Mali, rather than Senegal.

We decided to look for a nice deserted beach but instead, we finished up about 20km south of Saint-Louis in a small town called Mouit, which is not only located on the beach but also on a beautiful lagoon. It is right on the border of Parc National de Langue de Barbarie an Atlantic refuge for birds and sea turtles, which gather here to breed. It consists of a 20km length of intertidal flats and sand-dunes on a spit formed across the mouth of the Senegal River. 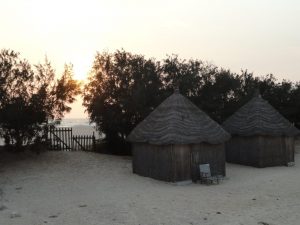 It includes both marine and riverine (brackish) waters. The terrestrial part of the park is formed by three main islands, the Ile de Gandiole being the largest. The vegetation on the infertile sandy soils is Sahelian in composition and thus provides a habitat for numerous bird species. The Zebra Bar, after all we heard about it was a little disappointing. It was not on the beach. 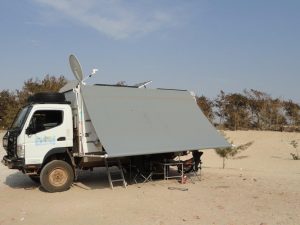 It was on a lagoon with hardly any beach, hardly anybody there, no wireless and no electricity, which we needed after a few days in the bush. Zebra Bar is 21km south of Saint-Louis so the only choice you have is to organize a taxi (10000CFA by Taxi return) or pack up and drive ourselves. Facilities where clean and good but we had seen much nicer places in Africa. It was the first time we had dinner inside as the wind was cold! Yes cold! It was blowing in from the ocean and the temp dropped to 23 degrees. After the heat we have been having this to us was cold and we needed our doona on the bed. I suppose for those coming from Europe down, The Zebra Bar it is the first stop. 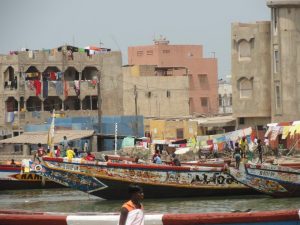 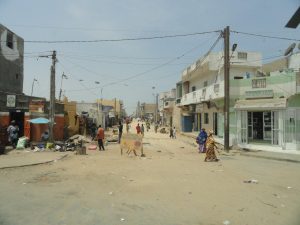 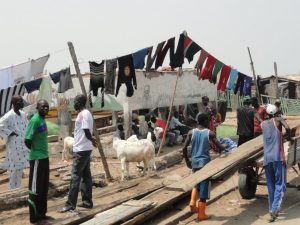 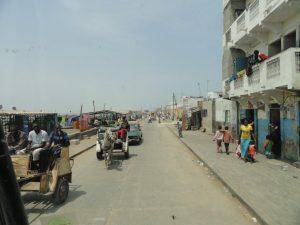 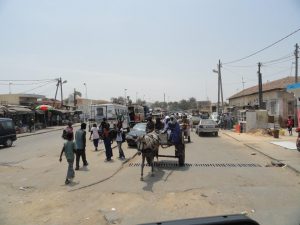 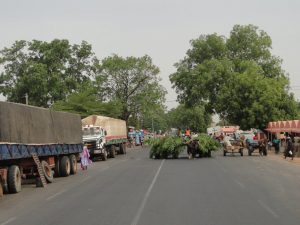 However, we were told by other overlanders of another camp ground right on the beach in Saint-Louis, with wireless, swimming pool, restaurant and electricity. (All included in the 5000CFA fee) In our view, it was a much nicer spot with very friendly people and so convenient being within a 2km walk to the city. We enjoyed our days here lazing around the pool doing our emails while having a few refreshments; a perfect sunset and a great meal. We would recommend this place way ahead of the Zebra Bar. Just a twenty-minute walk from the Camping le Ocean lies Saint-Louis, sometimes called ‘Zanzibar of West Africa’ and the first French settlement in West Africa. Having been to Zanzibar, we don’t agree with this description, but it is a nice town. 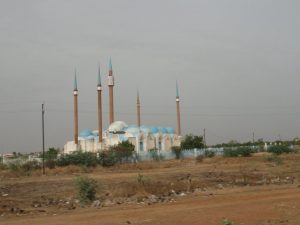 Saint-Louis is a West African city rich in history with narrow streets, colonial architecture, wooden balconies and beautiful patios. Originating from 1659 as a French colonial settlement, the city was built on the mainland, an island and a peninsula – eventually connected by bridges. The location of the town is on an island at the mouth of the Senegal River, its regular town plan, the system of quays, and the characteristic colonial architecture give Saint-Louis its distinctive appearance and its own identity.

(VIDEO Senegal is under construction)

Round the world video compilation