Located on the far southern tip of the Malaysian Peninsula only 130 kilometres north of the equator. The country is made up out of around 60 small islands and is connected to Malaysia by a causeway (Road and Railway) It is the largest port in South East Asia and one of the largest in the world. Most of the area is just 15 to 20 meters above sea-level. Highest point in Singapore is Timah Hill just 162 meters high. Singapore continues to perform its traditional function as a financial intermediary, shipping raw materials such as rubber, timber, and spices from the Southeast Asian region in exchange for finished goods from both within and, especially, outside the region. Major imports are machinery and transport equipment and crude petroleum, while machinery and refined petroleum products are the major exports.

Singapore has it all, theme parks, superb waterfront, great historic neighbourhoods, greenery, colourful Chinese shophouses, Sate markets, Raffles hotel (must do visit) Safari tour including a night safari which allows people to explore Asian, African and American habitats at night without any visible barriers between guests and the wild animals. The Singapore Zoo has embraced the ‘open zoo’ concept whereby animals are kept in enclosures, separated from visitors by hidden dry or wet moats, instead of caging the animals, while the River Safari, features 10 different ecosystems around the world

Singapore has a Monsoon climate with temperatures of around 30 degrees year-round and yearlong humidity the wettest and windiest period is during the northeast monsoon (November–March), average 250 millimetres in December. Driest time of the year is May to September. However, rain falls every day of the year

Singapore is just 135km north of the Equator and is a island of the coast of Malaysia connect by a bridge. But it is impossible to drive your own car in Singapore hence we decided to cross over from Johor Bahru. During my working life I had visited Singapore many times but being on holiday is very different. Despite its small size, Singapore has a lot of languages, religions and cultures. But English is the first language. In 1963 Singapore became independend from the United Kingdom. 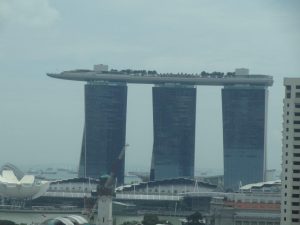 For us it always has been clear that those Singaporeans who speak English tend to support a western culture while those who speak Chinese support the Chinese culture. Those who speak Malay are supporting the Malay culture. (Islam) But most important all cultures seem to get on with each other. Singapore is a real cosmopolitan city clean vibrant and very westernized.