Western Australia is the largest state in Australia covering one third of Australia, however only just over 2 million people call Western Australia home. Of  those 2 million, the majority lives in the South Western part of the State. Western Australia is for those who love deserts, vast areas of non populated areas and the “land of the never never”. It is also the state with the best white fine sandy beaches and azure blue water. Distances are great. Must do destinations are Cape Range National Park, Monkey Mia (Tourist area) Ningaloo Reef and Coral Bay (tourist area), this rivals the Great Barrier Reef but less touristy. The Kimberleys, Ruddal National Park, the famous Canning Stock Route (1800 km long covering 51 wells), The Nullarbor an the track along the cliffs, or follow the railway line instead of the bitumen.

OUTBACK TRAVEL,  Word of warning for our international overlanders. The outback, Australian deserts and to some degree our beaches are very different to the terrain you are used to in Europe, Africa or South America. If you are travelling remote ensure one person in the vehicle has first aid knowledge, make sure you have proper communication equipment. Min Satellite phone, UHF radio, and if possible HF radio (available for rental) let people know where you are going and call in to advise them you have arrived. Travel well within your capabilities and when crossing rivers in the North be aware of Crocodiles, same applies to those who like fishing, Freshwater Crocodiles are not as dangerous however they bite and do a lot of damage. The beaches of Australia have some very soft sand in particular when you have to drive above the high water mark. driving the beaches on a outgoing tide is what I recommend when turning on a beach always turn towards the water to avoid driving uphill and turning in soft sand. Tyre pressure very important in our land cruiser I have been down to 10 psi. My suggestion is start at 25 psi and go down in 5 psi lots as required and keep the speed down. Be aware of deep rutted tracks, bull dust, mud, soft sand on beaches and inland tracks, deep water crossings all combined in one day of driving can be a challenge and can break parts in your vehicle not to mention being stranded mid stream with a flooded engine. Be warned do not become one of those people who know it all Australia’s outback is unforgiving.

The Kimberleys are in size bigger than Germany, are rugged, remote and hot. Must see destinations are the Bungle Bungles, Mitchel Falls, Bells Gorge, Windjana Gorge, Cape Leveque, Derby the town with one of the highest tides in the world at 11 meters and Wolf Creek Meteorite National Park.  80 Mile Beach is perfect for beach camping.

It has beautiful desert scenery, just make sure your vehicle is mechanically sound as no help is available in the event of a breakdown. (in the cooler months you find other travellers on the Canning stock route however in the summer this place is deserted with temperatures over 50 degrees). It will also allow you to explore the deserts or travel via the Great Sandy Desert and Tanami Desert to Alice Springs following a variety of interesting tracks. Don’t forget to take enough water, food and fuel. I am told that on the Kidson Track , 4KM west of the Canning Stock,  you are now able to stock up on fuel and limited food supplies. This is around 1000KM north of Wiluna and 650KM south of Bililuna.

For those who really like to go off road and remote, the southern deserts of West Australia are a great place to visit. After you visit the tourist areas around Ayers Rock, Alice Springs, the Olga’s and Kings Canyon head west towards Gibson Desert Nature reserve, 1.8 million hectares of outback. Enroute you will come past Docker River and Warburton and if you venture further north, to Kintore (430 km north of Warburton) just across the border into the Northern Territory. This whole area is perfect for 4WD, bushwalking, enjoying remoteness and caving.

The many Len Beadell tracks in the area have a lot of history. One of those tracks is the Anne Beadell highway. This track was constructed by Len Beadell in 1953 and took 9 years to build. The road was named after his wife Anne; however, the description ‘highway’ is a little misleading as the track is often very narrow, twisting and sandy. If you are coming from Coober Pedy, you need enough fuel to cover the next 750 kilometres as the nearest fuel is at Ilkurka. You need to be self- sufficient and permits are required to cross Aboriginal land in both West Australia and South Australia. On the way you pass Yeo Lake homestead around 167km east of Neale Junction. Be aware you now are remote; the water tanks normally have water in it but do not rely on it and boil water before drinking. In summer temperatures of up to 50 degrees are normal. Neale junction is on the junction Anne Beadell and Connie Sue highway. Now you are around 310 kilometres south of the main track which runs from Ayers Rock to Laverton. Please note this is rugged and remote terrain and be well prepared with proper communication, enough water and fuel. In return you will be rewarded with a true desert experience.

From here you could explore the Great Victoria Desert, an arid waste land that is Australia’s largest desert with a huge expanse of sandhills, grass and salt marshes. It stretches from the Gibson Desert all the way down to the Nullarbor Plain. (420000 sq. kilometres and stretches 700 kilometres from East to West). The Eastern area is populated by aboriginals. In this area you also find the Maralinga and Emu Field disused nuclear testing sites. Despite the very low rainfall in the area you will be amazed by the variation of landforms, the richness of vegetation and the fantastic red-ochre colour of the sand. Next you could visit Mamungari. The last time we visited this park it was called the Unnamed Conservation Park. This park is located just across the Western Australia border in far west South Australia. To visit the Tjarutia community you do need a permit. Instead of taking the Nullarbor bitumen highway towards Kalgoorlie you can also follow the track along the trans Australia Railway line.

This track runs around 100KM North of the sealed Eyre Highway between Ceduna and Kalgoorlie. By following the track along the railway line, you will arrive in Cook but before you do you could detour and include the Googs Track from the main highway north to Tarcoola and turning left towards Cook passing Ooldea, Watson and Fisher. After Cook you can continue the track to Forest and Rawlinna or head north from here for more desert exploring. After you pass Ooldea you follow the world longest dead straight railway track (478 kilometres) all the way to Loongana. From this area it is also possible to visit the remote Queen Victoria Spring Nature reserve or head south to the coast and visit the Nuytsland Nature reserve.

This is a wild and untamed area and suits well committed, well prepared 4WD drivers like the desert areas described above. Be aware that the beaches could be impassable and always check tide charts before setting up camp or driving to remote parts of the beach which require you to drive back. It is also easy to become bogged when the seaweed has built up and sand is wet or soft. You can follow the Ocean for around 190 kilometres on top of the 80 meters high Baxter cliffs. These cliffs are the world longest unbroken cliffs in the world. This would be one of the least discovered coast lines in Australia. The beaches and dunes continue all the way to Cape Le Grand. Inland you will find Cocklebiddy Cave the largest underwater cave in the Nullarbor.

Before arriving at Cape Le Grand, you pass through Cape Arid National Park. Here It is important that you check the crossings over the salt lakes. Once you arrive at Cape Arid and Cape Le Grand it becomes time for R&R with stunning beaches, clear blue water and rocky headlands. Great beach camping in secluded bays is a must. Our favourite spot is Lucky Bay; it is busy and very popular but after 6 or 8 weeks in the bush it is nice to see some other people. I would say Cape Le Grand, Coral Bay in West Australia and Whitehaven Beach in the Whitsunday Islands are the 3 best beaches in Australia. From Lucky Bay the sealed road is around 45KM to Esperance from where you could explore the rest of far West Western Australia or head north via Kalgoorlie, Coolgardie to Wiluna to do the 1800KM Canning Stock Route.  Pls note this trip is not for the faint hearted Make sure you carry good communication equipment, a first aid kit, at least 2 spare tyres, plenty of water, plenty of fuel ( I would have 2 tanks 180 litre and standard 90 litre tank) and recovery equipment.

For our around the world doubledutchworldsafari video click Part 1. Australia at the bottom of the Page. 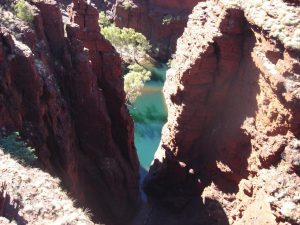 For our around the world doubledutchworldsafari video click Part 1. Australia.