The soaring snow-capped peaks of the alps, glittering blue lakes, glaciers, small historic villages, lakeside villages and castles. All this is part of jaw dropping scenery in Switzerland. Switzerland consist of 26 cantons (same as a province or a state) located in central Europe bordered by Austria-France-Germany and Italy. Switzerland has 4 official languages German 65% French (22%) Italian (10%) and Romansh (3%)

Some must see places

During our trip we covered the following areas. 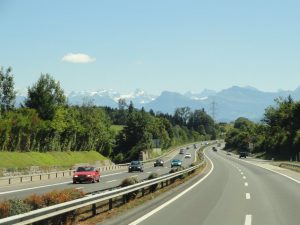 For cars over 3500kg you must pay toll for all roads in Switzerland, this is organized at the border. We paid 25 Swiss Francs or 31AUD for 7 days. After crossing into Switzerland, the first town we visited was Martigny the small town of Martigny located on the Rhone elbow in the Lower Valais is the hub of the pass routes across the Simplon, Great St. Bernard and Forclaz. Martigny, surrounded by vineyards and orchards Blessed with the warm Valais sunshine, the region is ideal for growing strawberries, apricots, grapes, asparaguses etc. In the mid Eighties I worked for Nestle and during this period I visited its headoffice in Vevey next to the world famous town of Montreux, so it was time to revisit this area. The town of Montreux nestles in a sheltered Lake Geneva bay, surrounded by vineyards and against the breathtaking backdrop of snow-covered Alps. Because of the exceptionally mild climate Montreux is called the capital of the Vaud Riviera. Plants associated with the Mediterranean, such as pines, cypresses and palm trees grow here. Charlie Chaplin, Freddie Mercury and several other famous people of world-renown lived and continue to live on the Vaud Riviera.The long, flower-bordered lake promenade which links Vevey and Montreux going all the way to Chillon Castle is simply asking to be strolled along. Cultural events, such as the Montreux Jazz Festival, The comedy festival and the Christmas markets attract many international visitors to the area,as well as countless excursion options to the mountainous hinterland or on the Lake Geneva or Lake Léman.

There really is no lake named: Lake Geneva. Its real name is Lake Leman It is one of the largest lake in Europe. 59% of it comes under the jurisdiction of Switzerland and 41% under France The greatest depth of the lake, in the broad portion between Evian and Lausanne, where it is just 13 km (8.1 mi) in width, has been measured as 310 m.  In the Lake Geneva Region, the scenery around the lakes lined by vineyards and beautiful residences set against the Alps or the Jura provides a fabulous and eternal sight that neither inhabitants nor visitors ever tire of. The sun, the clouds and the water play the leading roles. The shores are lined with steep, thousand-year old vineyards which enjoy generous sunshine and which produce a dry, mineral white wine: Chasselas. Within sight of scenically spectacular Alps and close to the captivating countryside…  On the shore of Lake Geneva, Vevey is a town of images, culture and shopping. Home of the Nestlé headquarters and several museums, In 1867, pharmacist Henri Nestlé invented baby milk powder. This is why the headquarters of this famous multinational, with a staff of 283,000 people throughout the world, is in Vevey. Founded by Nestlé, the Alimentarium – a food museum – tells the saga of the company and informs the public and food industry professionals. The Jenisch History Museum or the camera museum contains fascinating collections. Vevey’s charm enticed Charlie Chaplin to spend the last 25 years of his life there. In 1952, Charlot, aka Charlie Chaplin (1889-1977) settled in Vevey.

His statue was erected on the lakeside. A museum about his life and his work is in the process of being set up. From here we moved onto Lucerne. A city in north-central Switzerland, in the German speaking portion of that country. Lucerne is the most populated city in Central Switzerland. Its spectacular  location on the shore of Lake Lucerne (der Vierwaldstättersee), within sight of Mount Pilatus and Rigi in the Swiss Alps, have to be seen to be believed and are postcard perfect. Lucerne was voted the fifth most popular tourism destination in the world in 2010 by Trip advisor. Lucerne, the gateway to central Switzerland, sited on Lake Lucerne, it demands a an impressive mountainous panorama. Thanks to its attractions, its souvenir and watch shops, the beautiful lakeside setting and the nearby excursion mountains of the Rigi, Pilatus and Stanserhorn. Luzerne historic houses decorated with frescoes line the picturesque town squares as they do the ‘Weinmarkt’ square in the car-free old town. Lucerne is a city of town squares and churches. The Vierwaldstätter See or Lake of the Four Forest Cantons (the three original cantons of Uri, Schwyz and Unterwalden together with the canton of Lucerne) is commonly referred to in English as Lake Lucerne, but this is, in fact, only one of the lake’s many arms. Lying at an altitude of 437 m/1,434ft, it is the fourth largest of the Swiss lakes (area 114 sq. km/44 sq. mi), length from Lucerne to Flüelen 38km/24mi; greatest depth 214 m/702ft) but is second to none in magnificence and scenic variety. The beautiful shores of the lake with their southern vegetation offer numerous swimming places. But be warned the water is cold. After a perfect camp spot on the lake we headed for Zurich. Zürich), Switzerland’s largest city and capital of the canton of Zurich, is also the country’s economic and cultural hub; but with all its bustling activity it is still one of the finest Swiss towns, with carefully cherished traditions and much to attract and interest the … More >

Visitor. The town lies at the lower North Western end of Lake Zurich astride the river Limmat which flows out of the lake at this point, between the Uetliberg on the west and the Zürichberg on the east. Three of the five major Swiss banks have their head offices in the famous Bahnhofstrasse, one of the finest shopping streets in Europe. Here there are fashion houses, boutiques, department stores and specialist shops (especially jewellery, watches and clocks, shoes, furs and fashion accessories). Small boutiques and antique dealers can be found mainly in the old town to the south of the A fifth of the country’s total national income is earned in Zurich.