If you’ve never gone fishing before, now might be the time to drill a hole through a frozen lake to catch fish such as Arctic char, trout, salmon, pike, perch, grayling, and whitefish.

We braved the cold on clear crisp winter nights, and were rewarded with one of nature’s most spectacular displays — the Aurora Borealis (also known as the Northern Lights). These light curtains of green, red, and purple often dance across the sky  from October to March and, depending on weather conditions, can be viewed from anywhere in northern Sweden, Finland and Russia.

Go snowmobiling across frozen rivers, explore the large snow covered forests, get off the well-worn road and try an invigorating ride across a frozen lake. Finnish Lapland is immense. It covers an area larger than the whole of Portugal, but the concept of Lapland is even larger. As you travel further north along the outstretched “arm” of north-west Finland, the coniferous forest gradually vanishes from the landscape and the birch trees shrink to a meter in height; the fells begin to rise around you in every direction and you find a silence unlike anywhere else on earth.

Located in the far north of Europe, it is looked upon as a remote country. 70% of the country is forest and with 56000 lakes and thousands of islands it is a great place for the outdoors. Russia on the Eastern Border and the Gulf of Bothnia to the west. Finland’s highest mountain is 1328 meters high. (Mount Halti) 20% of the population lives in Europe’s Northern most capital Helsinki.

Finnish Lapland is immense. It covers an area larger than the whole of Portugal, but the concept of Lapland is even larger. As you travel further north along the outstretched “arm” of north-west Finland, the coniferous forest gradually vanishes from the landscape and the birch trees shrink to a meter in height; the fells begin to rise around you in every direction and you find a silence unlike anywhere else on earth. We entered far North Finland near Inari. After a short visit to the museum in Inari, we visited Europe’s most northern ski resort, Saariselka. Ski season starts in October and lasts until the end of May. After the bitterly cold temperatures in North and North West Sweden, we thought the temperature was quite mild when we entered far North Finland and more importantly, it was quite sunny. The scenery was a beautiful snow-covered landscape and with hardly any traffic, it was a pleasure to drive on the snow-covered roads. It was a very long day (390km) and dark before we arrived at our next campsite near Korvalapolka. The night was crystal clear but unfortunately no Aurora Borealis. (Northern Light)

It is impossible not to stop at the Santa Claus Village just North of Rovaniemi in Southern Lapland. Unfortunately, we did not time this very well. Finland school holidays, busloads of Japanese and American tourists, mixed with every nationality of European tourists all looking for a glimpse of Father Christmas and his Reindeer. Nevertheless, it is a must to visit.

The village is located right on the Arctic Circle and has the world’s most famous post office. This post office receives thousands of letters every day from all around the world from children presenting their gift wishes. All this, mixed with about fifteen souvenir shops.

Rovaniemi is Europe’s largest city, an impressive town with two huge frozen rivers, the Kemijoki and Ounasjoki, and boasts as we are told, the world’s most northern Mac Donald’s Store. We did in fact visit the store because this is where you get free WIFI. The local service station allowed us to stay overnight and use the electricity post, normally used by customers to plug their cars into to keep the engine warm while doing shopping; just 8 Euro, not bad. We do have solar, however with very limited sunlight and the sun being so low, it does not work very well. Not to mention snow and ice on top of the panels. We are now turning north again to participate in some more winter activities.

We went snow moiling on a 1200CC snow mobile with a top speed of over 100km per hour, and reindeer racing in a real Lapland sleigh. It wasn’t that long ago that people and goods were moved from one place to another, in a small sleigh pulled by a reindeer. Before the snowmobile became popular in Lapland, the reindeer was needed for almost everything; and in deed, for travel. Nowadays the reindeer is still an important source of nutrition and handicraft materials in Lapland. Nothing beats a stop in the middle of the bush with a nice campfire, some real coffee and a lunch of sausages in a real Lappish tepee structure. Due to clear weather, we were also lucky to see the Northern Light again. The Northern Lights to me look like a sunset in the sky. The difference is they appear occasionally in arcs or spirals. They are most often light green in color, but also sometimes have a hint of pink. Strong eruptions also have violet and white colors. Red northern lights are rare, and we were very lucky to see this in Far North Finland. Photographing this spectacle is very difficult for an amateur like me but we did get some shots.

We look forward to more sightings as March is the best month for the Northern Lights or Aurora Borealis, From Rovaniemi we headed North again to the snow sport capital of Finland. Having had the initial experience with snowmobiles, we decided to hire one ourselves without a guide and explore the 890km of tracks in the Arctic wilderness around the small village of Levi. Clear skies but bitterly cold weather made this a true Arctic experience. On a snow mobile, you are a participant in traffic and traffic rules apply. You also need a driver’s license and maximum speeds do exist. In this part of the world the snow is on the ground from October till the middle of May.

With blue sky and cold temperatures, we are hoping to see one more show of the Northern Lights. From Pallas National Park near Muonio we turned south towards Kemi where we visited the largest Snow Castle in the world, built each year. It covers an area of 20000 square meters with towers as high as 25 meters and the castle itself three stories high. The longest walls are 1000 meters long.

The castle includes a Snow Restaurant where you sit on Ice tables and seats covered with reindeer fur, and a perfect Ice Bar. In Australia we see tourists arrive and get married on the reef or the beach.

Here people are lining up for weddings in the Ice Hotel, Snow Church, party in the Ice Bar and stay overnight in the Ice Hotel. While we were here we saw couples from the United States, Japan and Europe getting married. The ecumenical Snow Chapel has around 100 seats.

One of the highlights in Finland was the cruise on the Icebreaker Sampo and our swim in the Arctic waters. It is unbelievable how this ship breaks the ice that is over one meter thick in places. This was a once in a lifetime experience. Not to mention the dip in the Arctic Ocean! 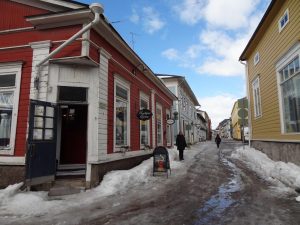 (VIDEO Finland is under construction)

Round the world video compilation